From the perspective of the average user the intricacies of software development may seem akin to magic or some form of science. The reality is often much less glamorous and filled with frustrations. OpenSim as software is now over 10 years old and in that time a lot has changed. From new features, improvements and most importantly bugfixes it has evolved to now support the continuous growth of so many communities. What was once a large team of enthusiasts has largely turned into a handful of individuals still working actively to enhance the software. Naturally development has slowed down and the focus has shifted somewhat to improving the existing features.

While bugs being squashed are an important part of development another is probably even more important. Performance. As the metaverse as a whole grows and the features demand ever more performance to deal with new shiny things such as mesh, whether you are greeted by a slideshow or a fluid movie is ever more important. This especially in times that culture shifts towards demanding engagement in video games and not just pretty pictures.

This is generally an incremental process, but OpenSim is more than the parts it is made up of. As software it relies on a framework to avoid re-inventing the wheel and handle common things without creating even more programming code. As this framework is still in active development it naturally improves as well, bringing new features, performance enhancements and new concepts to the table. The framework underneath is .NET/Mono, which is now entirely owned by Microsoft. Previously the Mono part was under the hands of Xamarin and independent. As project it was aimed to provide a .NET environment for the Linux kernel. Not that long ago Microsoft bought Xamarin however. What you take away from that acquisition is up to debate still, but it has so far brought some advancements to Mono.

OpenSim has somewhat embraced this change and eventually switched to newer versions of the Mono framework as the basis. Mainly driven by the new features and performance of Mono this change has brought many things with it. From the initially bumpy start most of the teething issues have been resolved to the joy of anyone now working with OpenSim. Adjustments to the code and application of new concepts has meant that OpenSim performance has improved significantly. Especially in the active development branch this improvement is quite striking to see. We recently saw this first-hand.

ZetaWorlds, our in-house grid, recently turned 8 years old and to celebrate that occasion a large party was held on one of its regions. This saw nearly 40 people attending the celebrations at some point, which does put a not insignificant load on the various aspects of OpenSim. It was thus rather reassuring to see the performance was not only stable, but in comparison to what it would have been 10 years ago, a lot better than expected. Short of staging an actual test to find the breaking point of it all it did serve to illustrate how far the improvements have come in a decade.

A measure of performance in OpenSim is generally bound to the frames per second the simulator can produce running the region itself. In an ideal scenario this would be 55 frames per second, which serves as the maximum and stable point. Any number lower than this would constitute a situation of backlog, where there are more things to process between each frame than can be reasonably achieve in the allocated time. Situations that produce a lower number can often cascade further essentially grinding everything to a halt. On the side of the actual hardware running OpenSim there is no real measure of performance, instead here we are looking for the amount of resources consumed by the instance of OpenSim. This is the same for any process running on a computer with memory and processor time consumption being the important metrics to monitor.

Not too long ago the general consensus was that each avatar on a region would consume 150-250 megabytes of memory and a good 10% processor load. As resource usage increased the likelihood of Opensim being unable to keep up handling all those resources and thus having to reduce the amount of frames it could produce per second generally happened around 30-40 avatars. This would often mean many gigabytes of memory usage and nearly filling most consumer grade processors of the time. So the following performance improvements are rather striking to see. 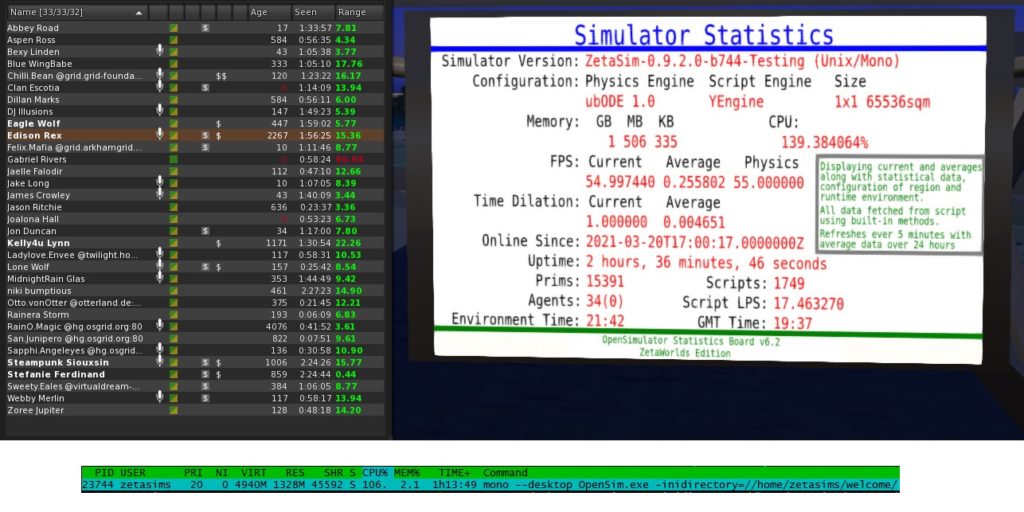 It goes without saying that this is an almost ideal situation of all avatars not engaging in a contest of who can throw the most physical objects at each other, which would likely not have had the same results. It is also important to mention that especially when loading a new avatar to a region, much like any significant change, there are times OpenSim chokes on the amount of data to process. This often results in temporary freezes, which resolve themselves, but have a negative impact on the average frame time as is clearly visible.

While there are still ways to go as is evident from the processor usage being pretty high, an event like this being possible and not causing anywhere near the expected resource usage is a massive improvement. From these metrics it seems reasonable to assume that even twice the amount of avatars should, given they are not trying to have a bumper-car session, be within the realm of possibilities.

Much like ZetaWorlds we are looking forward to what the future may hold and hope the quest to improve performance and reduce resource utilization will make even larger events possible in the future. We thank the community ZetaWorlds for making this, in a way unscheduled, performance test possible and obviously for celebrating with us the 8 years of success. 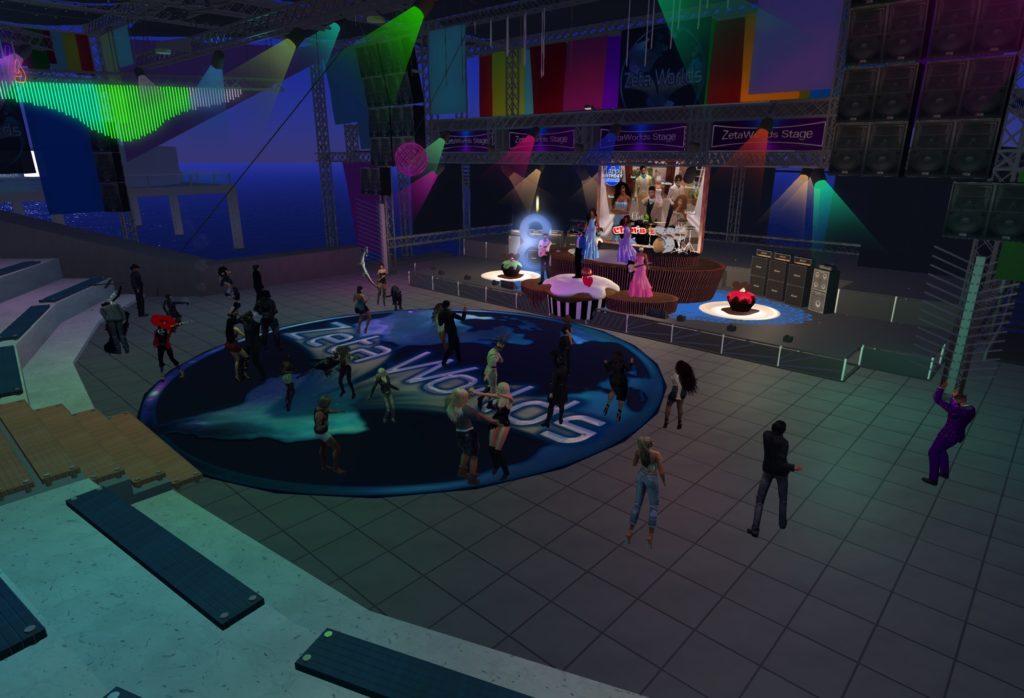 1 thought on “10 Years Of Performance”

When the servers have nothing better to do they like to help the fight against cancer.